The Jungle Weather project aims to transcribe weather observations recorded between 1949 and 1958 in the tropical rainforest of the Democratic Republic of the Congo.

Long-term observations of tropical weather are rare. The Jungle Weather observations comprise three decades of data of weather in the central African tropical forest, and are therefore an extraordinary source of information to support our understanding of for example drought resilience of trees species.

Within this project we will focus on data records as recorded throughout the tropical part of what is currently the Democratic Republic of the Congo (DRC). The area which we will cover is shown above in the map as an open polygon. The project will not cover the southern province of Katanga (red crosshatches) as this area transitions here from tropical to a humid subtropical climate.

The historical data is archived and stored in the Belgian State Archives. The Belgian State Archive harbour almost all data regarding colonial affairs, ranging from communications about trade to the raw data as digitized within the context of the Jungle Weathers project. Row upon row of data is stored in the basement. Below you see a part of the INEAC (Institut National pour l’Etude Agronomique du Congo belge) archive, which holds all climatological records. 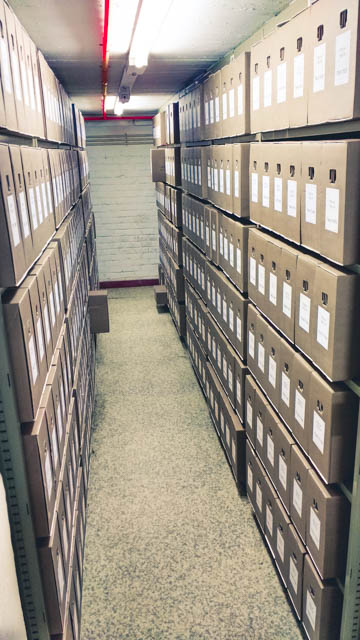 These climatological records were noted rigorously on carbon copy paper. However, due to the hand written nature of the data (and the volume involved) automated processing is not possible. Although optical character recognition (OCR) works wonderfully on printed data the high variability in characters and the low contrast pencil markings contribute to the failure of current automated approaches. Similar to the Old Weather project and in spirit of the Jungle Rhythms project, a keen eye is required to decipher the numbers written down on these sheets. 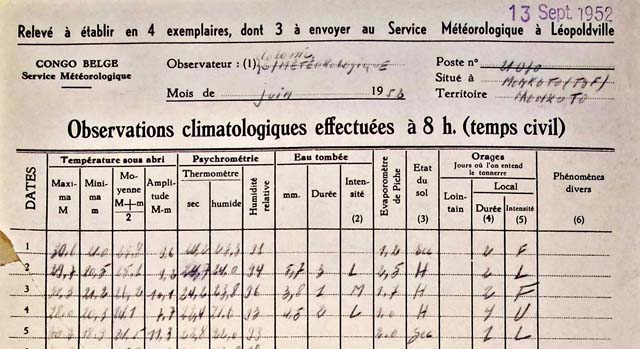 The project will provide you, citizen scientists, with digital pictures of the original sheets. Scanning these climate data sheets was a laborious process. In total more than 70 000 records were digitized. Unlike the Old Weather project we do not require you to outline valid sections of the sheet. This part of the processing has been automated. As such, once digitized and properly aligned the whole record will be divided into an estimated 30 million cells and 70 000 header files. Below you find an example of a header file and a table cell.

For the table cells a substantial number are empty. During pre-processing rows with all empty cells will be excluded from processing, this lowers the number of actual values to roughly 10 million cells to transcribe.

The cells are padded so they might include some of their neighbours. This is needed to ensure that all data is included in case the hand written numbers do not stick to the nice layout of the table. As with all citizen science projects your feedback is essential in tracking strange cases and transcribing the correct data. In the above example you see that the data (on the bottom line) reads 10.1.

Why is this old data important?

The climate data collected between 1910-1960 in the DRC is important for a number of reasons. Longer records improve the accuracy of climate change models. Data from the Congo Basin is currently underrepresented in climate models. Not because the data isn’t available, but because the data is not accessible (read: digitally readable). Although annual and monthly averages of the data have been published, contemporary research depends on the original (sub)daily climate observations, which are used for modelling.

As an ecological parameter, climate influences the ebb and flow of biological phenomena within the second largest tropical forest in the world. During colonial times, the observations were used for many purposes, such as the control of grasshoppers, the protection of crops, the safeguarding of the electrical network or the protection of air traffic. Today the historical climate data remains an important complementary dataset for many ongoing research efforts. For example, forestry research started in the Congo Basin in the early 1930’s. Many of the trees /forests alive during colonial times are still the object of study today.

Who gathered the data?

The data in these archives was collected during the colonial period by Belgian scientists, technical staff and volunteers. The Headquarters of the Service for Meteorology and Geophysics was based in Leopoldville (now Kinshasa). The service consisted of numerous regional centers and a hundred stations forming a network for synoptic and climatic meteorology. An additional 800 stations (see interactive map above) cooperated voluntarily, including schools and mission stations. The service was in constant contact with the Institute for Scientific Research in Central Africa and the Institut National pour l’Etude Agronomique du Congo belge (INEAC) Below you find a map of all stations. Jungle Weather will (currently) only transcribe the stations with at least both temperature and rainfall data present.

Was there a strict protocol?

Yes, this is described in an official publication. However, the protocol was amended several times over the 50 year period. From 1939 onward, all measurements across various state services were standardized.